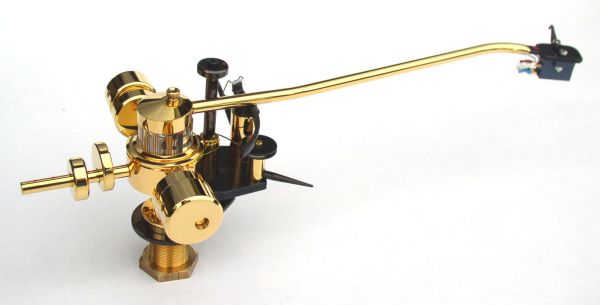 At very low frequencies the modulation in the record is only horizontal. If the tonearm can move too freely horizontally the low frequency motion of the stylus will be transferred to the cartridge itself, while the cantilever of the cartridge almost does not move, and thus only a weak signal is induced.

To have excellent audio reproduction at these low frequencies, the horizontal movement of the tonearm must be restricted – but to ensure perfect tracking this must be achieved without a similar restriction of the vertical movement. This “anisotropic” principle – different characteristics for different directions of movement – is the essence of the MØRCH DP-8.

The DP-8 has a flywheel shaped central body and two weights on the sides to stabilize the movement of the tonearm horizontally. Thus, as the cartridge moves towards the center of the record, it can only follow the average location of the groove. It cannot follow the modulation, which is all transferred to the cantilever. This means that all the recorded bass, even the very low end of the range, is reproduced with full amplitude and dynamics. 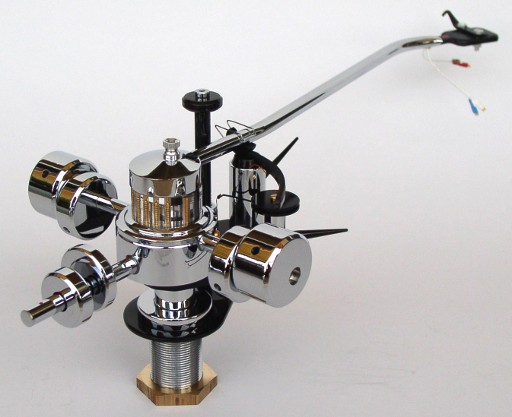 DP-8 with 9” PRECISION armtube. It is the two weights on each side of the heavy central body of the tonearm that provides for the majority of the effective mass (Inertial moment) for the horizontal mode of motion. The center of gravity of these weights are pointing backwards – either upwards or downwards, so that they contribute to the counterweighs at the same time as they provide for moving the center of gravity of the moveable part of the tonearm up or down.

Model DP-8 has a unique combination of bearings: For the horizontal mode of motion a silicone damped high precision ball-bearing assembly increases the stability provided by the large housing and sideweights. For the vertical mode of motion two precision sapphire bearings are incorporated.
The vertical motion also may be damped if desired, by injecting silicone fluid into a well. Vertical damping is rarely needed for this model. It is independent of the damping of the horizontal mode of motion, and further it can be adjusted to all intermediate levels of damping.

Model DP-8 has an integrated device for adjusting the VTA while playing. Markings for "getting back" to a special setting is provided.

The feature with different weights of armtubes to optimize the tonearm for any cartridge is maintained. Thus warps will not influence the tracking force, and there will be no vertical deflection of the cantilever.

In model DP-8 the azimuth adjustment for perfect channel separation is accomplished at the pivot of one of the sapphire bearings.

Supplied in CHROME- or 24 carat GOLD finish.
The armtube plating being made without the use of magnetic materials.

There are no reviews for this product.


Your Review: Note: HTML is not translated!

Enter the code in the box below: